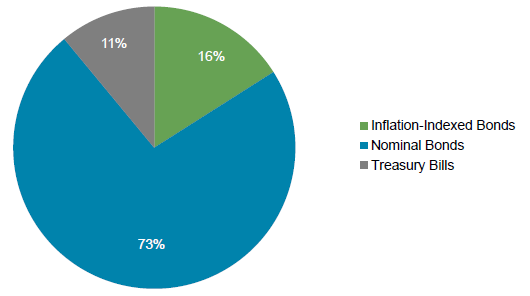 Nominal bonds remain the primary funding vehicle and constitute between NZ$58 billion to NZ$59 billion of the forecast 2020/21 NZGB programme.

Nominal bond line caps are NZ$18 billion. This level allows for the need to promote liquidity in each bond line, while managing the size of maturity cash flows and mitigating refinancing risk. However, the full capacity of any bond line may not be utilised.

The current structure of the NZGB portfolio allows for "in fill" bond maturities to be introduced within the current NZGB curve or for extension of the curve, as market conditions allow.

NZGB portfolio and expected syndication issuance as at 1 July 2020 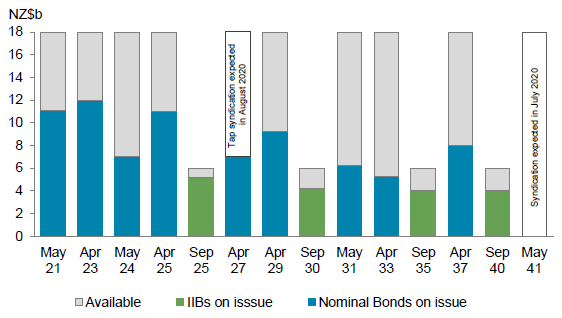 Inflation-indexed bonds remain an important part of the core Crown borrowing programme. IIBs support diversification of the investor base and enable a portion of interest expenses to be correlated with the economic cycle and thereby fiscal revenues. Individual IIB lines remain capped at NZ$6 billion face value. Although IIB issuance was paused over the June 2020 quarter, it is expected that there will be approximately NZ$1 billion to NZ$2 billion of IIB issuance in 2020/21, subject to market conditions.

IIBs constitute a sizable proportion of the total NZGS portfolio, at 16 per cent, relative to global peers. While a specific level is not targeted, the proportion has increased over recent years. The appropriate proportion of IIBs within the portfolio, and the appropriate rate of issuance, is assessed on an ongoing basis. While commitment to the IIB product remains constant, IIB issuance will constitute a smaller proportion of total annual issuance in 2020/21, than in recent years. This strategy recognises market feedback and the relative cost of issuance.

Treasury Bills (T-Bills) provide flexibility to address short-term cash needs which may arise as a result of upcoming bond maturities, or seasonal or unexpected changes in cash flows. T-Bills are made available through weekly tenders.

T-Bills on issue are forecast to be NZ$10 billion at end-June 2021. This is NZ$6 billion higher than previously forecast at HYEFU, reflecting the current economic and fiscal environment where short-term cash needs are less predictable. The actual volume of T-Bills on issue may vary from forecast, based on factors such as the relative cost of T-Bill issuance versus alternative short-term funding mechanisms and actual short-term cash needs. Alternative funding mechanisms are available to NZDM, which further help to meet any short-term cash needs of the Crown, if, and when, they arise. These include a limited overdraft facility with the Central Bank, The Reserve Bank of New Zealand (RBNZ), and short-dated foreign currency ECP issuance. In addition, NZDM maintain up-to-date legal documentation for an EMTN programme, should this be required.

Primary Market Framework. NZDM implemented changes to its Primary Market Framework in September 2019. Under the revised Framework, to qualify as a Registered Tender Counterparty (RTC), an intermediary must play a significant role in intermediation of NZGS products to investors, as well as committing to support secondary market liquidity and pricetransparency. They must also support the primary market through regular participation in NZGS tenders.

Only RTCs are eligible for syndication issuance panels, and NZDM will support other relevant activity conducted by the RTC. RTCs are listed on the New Zealand Debt Management website to create visibility for investors.

Tender issuance. Issuance into existing NZGS lines will primarily occur via regular tenders. Since April 2020, details of the upcoming month's (rather than quarter's) tender schedule are published in advance. The aim is to provide market participants with as much certainty as possible regarding issuance plans, while maintaining some flexibility to adjust the issuance profile throughout the year. At each weekly tender, multiple NZGBs are now offered, compared with just one previously. Tender schedules are announced at the set time of 8am (NZT), on the day prior to the last tender of the previous month. Full details of tender dates, maturities, and volumes are provided.

T-Bill tenders take place on a weekly basis. The volumes offered across the 3, 6 and 12 month lines are based on funding requirements and are announced on the day prior to the tender. The amount issued will depend on an assessment of bids received relative to other short-term funding mechanisms, and subject to the operating rules and guidelines (PDF 482KB).

During the month of July 2020, a total of six NZGBs will be offered through weekly tenders. This profile is designed to provide liquidity and price transparency at different maturities across the curve. During July 2020, weekly tender volumes will be approximately NZ$1 billion.

Syndicated issuance. Syndications remain the preferred method for the issuance of new bond lines, as it enables the placement of a large initial volume into the market, promoting immediate liquidity in the new bond. Tap syndications will also be used to add notable volume to existing bond lines. Syndication intentions are generally announced alongside an Economic and Fiscal Update, with further details provided alongside subsequent monthly tender schedule announcements. Further operational announcements are made later, relating to the appointment of any syndication panel and launch of the transaction. Alongside support from intermediaries, the Funding Strategy aims to enhance secondary market liquidity by prioritising:

Undertaking bond buybacks. The Funding Strategy generally incorporates a policy of buying back bonds prior to their maturity. This helps to smooth cash flows around bond maturities, and to enable the recycling of maturity proceeds to investment further out the NZGS curve.

It has been recent practice to buyback outstanding bonds within an 18 month window before a bond matures. The RBNZ typically assumes responsibility for buyback activities during the final six month period before a bond matures, in an effort to ensure overall financial system liquidity.

Focusing on core instruments issued in NZD. The focus is on NZD denominated issuance in the domestic market. This helps to maximise liquidity in existing NZGS, and is currently more cost-effective than issuance in foreign currency. A well-developed NZD denominated NZGS market also supports domestic capital markets.

The 2020/21 borrowing programme forecasts do not include foreign currency issuance. However, NZDM have operationalised the short-dated foreign-currency ECP programme and intend to maintain a small amount of ECP on issue.

However, in the event Government debt levels decline, the commitment remains. The Government sees a sustainable and readily accessible NZGB market as important in supporting fiscal resilience. A commitment to a minimum NZGB market helps support liquidity and instils confidence in intermediaries and investors when choosing whether to participate in the market. Increasing the average weighted maturity has contributed to meeting several objectives. It has improved the Crown's asset-liability matching, taking into account the interest rate sensitivity of the Crown's long-dated assets. It has supported investor diversification by capturing demand from investors with long-dated liabilities. It has also helped reduce refinancing risk and frequency, as well as contributing to the development of New Zealand's capital markets overall. Over the long-term, there is no specific target for the average weighted maturity of the portfolio. Broadly, NZDM continue to see benefits in increasing the average weighted maturity of the bond portfolio. However, issuance decisions will also be informed by an assessment of investor demand and market conditions.

On various independent sustainability and ESG metrics, New Zealand is one of the most highly rated sovereigns in the world. This includes a 2019 Sustainable Development Goals (SDG) global rank of 11 out of 162 countries.

The New Zealand Government also has clearly stated wellbeing objectives. The first ‘Wellbeing Budget' was delivered in 2019 and included a package of initiatives to measure progress focused around five Budget Priorities[6].

Included in the Wellbeing Budget initiatives was the creation of an independent Climate Change Commission to advise on carbon reduction techniques and setting a provisional emissions target and revised cap and price controls for the Emissions Trading Scheme[7].

In Budget 2020 however, a number of the new initiatives under the Budget Priorities were postponed in order to fund the targeted, primarily socially-focused, COVID-19 response and recovery measures. That said, the aim of the measures remain prioritising the wellbeing of current and future generations of New Zealanders.

In this context, NZDM have no imminent plans to issue bonds in a specific ESG format. More broadly, NZDM are cognisant of the contribution efficient debt funding can make to support the Government in achieving ESG objectives.

Maintaining an investor base which is diverse by geography, investor type and mandate is achieved through an active investor engagement strategy. As part of its investor engagement strategy, NZDM undertake frequent interactions with its investor base. This includes publication of the monthly Investor Update and a regular meeting and presentation schedule. In the current environment, NZDM have adapted the meeting and presentation schedule to incorporate virtual platforms. More detail on all media and external publications can be found in NZDM's online investor resources.