The Treasury's forecasts at BEFU 2020 show a substantial deterioration in the Crown's fiscal position, relative to that forecast at HYEFU in December 2019. Over the five year forecast period in BEFU 2020, a cash shortfall of NZ$151 billion is expected. This is approximately NZ$120 billion higher than forecast at HYEFU in December 2019. This core Crown cash shortfall (‘residual cash deficit') is being funded largely through additional borrowing by the core Crown. Forecasts for residual cash are taken into consideration when forecasting the total core Crown borrowing programme, along with liquidity requirements and the projected financial assets position.

The core Crown borrowing programme includes the issuance of both New Zealand Government Bonds (NZGBs), which include nominal bonds and inflation-indexed bonds (IIBs), and short-term borrowings, such as T-Bills. Together, these make up New Zealand Government Securities (NZGSs). Consistent with the profile of core Crown residual cash requirements, NZGB issuance is predominantly weighted towards the early part of the forecast period. Heightened uncertainty remains on the timing, and to a lesser extent the size, of cash requirements, given the variability in economic activity due to COVID-19. To mitigate this uncertainty, the forecast increase in core Crown borrowings is higher than the forecast change in cash requirements. As a result, this leaves a sizeable forecast cash buffer, which allows the Government to be better placed to manage funding and liquidity risks.

Funding requirements will be revisited ahead of the Pre-election Economic and Fiscal Update (PREFU) 2020, which will take place prior to the New Zealand General Election on 19 September 2020. 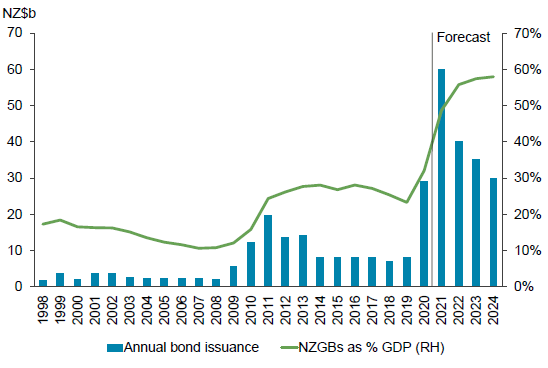